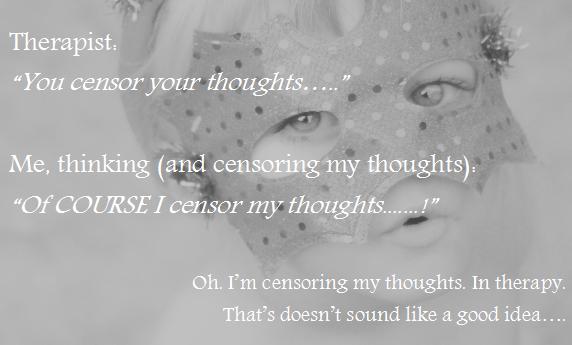 Part I – Speak before you think

We all wear a mask and conceal our thoughts – in many ways life could not proceed without it. If we told everyone everything that was on our minds, all the time, the world would be an even noisier place and we would have precious few friends left in it. We pick and choose; we filter what we say, and in that sense we present the world a partial view. That’s okay – those are the accepted conventions of social conduct.

But the conventions in therapy are different. My therapist and I had talked about ‘free association’ in the past – mainly to comment on how difficult it was. Though associated with Freud, it does not need to be done on the proverbial couch or in the context of ‘traditional’ psychoanalysis. Free association is: “the mental process by which one word or image may spontaneously suggest another without any necessary logical connection”. The idea is that the patient, quite simply – oh, if ever there was a case of ‘anything BUT’ – talks about what is on their mind, with no effort to tell a linear story or shape the thoughts that come to mind.

I’ve lost count of the number of times my therapist has encouraged me to ‘just say what’s on your mind’, when I have been sitting there in silence, or admitted to not knowing what to say next. It’s only now that I realise that I heard the words, but what I took them to mean was: ‘just choose one of the many things you had on your list to talk about before you came here’; or ‘just think of something sensible or interesting to say’.

Which is why when she eventually told me that I censor my thoughts it was simultaneously both a statement of the blindingly obvious and also a blinding revelation. Censorship is not just the enemy of free association – by definition, if I am censoring my thoughts I cannot be free associating. Censorship is about suppressing something- free association is about revealing the suppressed. I find it hard (and sobering) to believe that I have been in psychotherapy for two years and have never thought about this before, let alone realised what I was doing and how it might be impacting the therapeutic process.

This realisation came a few sessions after another, similar ‘revelation’ in which I became conscious of the fact that I spend a lot of time during session talking to my therapist, as one might expect – but a fair amount of it happens IN MY HEAD. So when there’s a silence (which happens quite often), sometimes I will be panicking about what to say next, sometimes I will be trying to reach a thought or a memory or try and figure something out. But often, I’m simply continuing the conversation I was having a moment go, but in the safety and privacy of my own brain. Since I’ve become aware of this, I keep catching myself doing it with disturbing regularity – even, on occasion, catching myself ceasing to verbalise mid-sentence.

Why? Why am I doing these things when the very reason I am supposed to be there is to talk openly about how I’m feeling and what I’m thinking? I thought I trusted my therapist to a great extent and would tell her anything – but somehow the thought of telling her things as and when they happen, downloaded straight from my brain with no filtering – feels like a very different, and a much bigger, risk. The silence is a type of filter too – it’s just one that lets nothing through, rather than showing some parts, and hiding others.

My husband recently told me that I have never really talked to him in the way that many partners communicate with each other. I don’t really talk to him (or to others) about my day, or about how I feel. I can make small-talk at parties or intellectualise if it’s called for, but when someone asks me about myself, my tendency is to answer briefly and then focus all the attention on them, by asking lots of questions in return. That way lies safety – I’m in control of the questioning and my anxiety over what to say or not say, can dissipate. Why do I find it so difficult to talk about myself? I think there are probably three key reasons.

What I say isn’t interesting: fundamentally, I don’t understand why people would be interested in what I have to say, unless it benefits them directly in some way. Why would they want to hear about my day? Or about what I thought of the news, or a  particular situation at work? It feels as though it would be boring to talk about. Why would someone want to know about the minutiae of my life?

Defence against intrusiveness: the only person who DID want to know about the minutiae of my life – my mother – felt she had a right to know. And so keeping quiet about certain things was a way both of preserving my own space and keeping complete ownership and control over certain parts of my life and my thoughts. And if my mother wanted to know the minutiae, she also made it very clear that no one else could ever love me or be there for me, in the way that she was. By extension, no one could ever be as interested in me as she was. Or perhaps interest came to me to be synonymous with intrusiveness; and if there is an absence of the latter, perhaps I also take it as an absence of the former.

What I say will be judged: sometimes I don’t feel I can start a conversation because I know I don’t have the energy to finish it. Sometimes I don’t talk because I know my view-point won’t be accepted. When I was younger, people would ask me questions and I knew what answer they wanted me to give. The answer that accorded with their own view, or at least their view of me. And we’re back again to feeling as though no one would be interested in what I have to say: if my answers are judged, then what was behind the question was not a genuine interest in me.

Judgement, lack of interest, intrusiveness. All of those past experiences make it hard to talk in therapy. But their absence in therapy makes it equally hard to talk. My therapist is not intrusive, she doesn’t judge me, and she is genuinely interested in me. But I have no idea how to operate in that environment – all I can think of, is ‘what does she want to hear, what does she want me to say?’. It’s almost impossible to believe that she doesn’t have ‘an agenda’, however benign it might be. It’s hard to get my head around the fact that she values and wants to use whatever I bring, because whatever I bring is an expression of myself, and that is what she’s interested in.

Once I became aware of my censoring, I did start to tell my therapist things I would have ordinarily chosen not to mention. Thoughts and memories that came to mind that I couldn’t see the relevance of. Phrases that I would normally have reworded to sound more innocuous. Small details of my day that I thought inconsequential. And of course, they were anything BUT. She made use of them immediately, in ways that made perfect sense. They resulted in material we’re still working on now. Perhaps it was simply luck that the first few times I tried out ‘un-censoring’, the results felt really significant.

Free association is hard; it’s uncomfortable; and it’s risky. Why? Because it involves a complete lack of censorship – it’s a revealing, an unmasking. I’m going to try and say what’s on my mind more often; and I’m going to try and always talk to my therapist aloud, and not in my head. I don’t want her to be able to say: “Your silences remain; they are your biggest mask”*.  Instead, I want to fill those silences with whatever comes to mind. It will take courage. As the children’s film ‘Cinderella’, says: “The greatest risk any of us will ever take – [is] to be seen as we truly are”. When it comes to therapy, at least, I think that is one risk that is definitely worth taking.

Part II – think before you act

Mask, noun: A covering, worn as a disguise

I have my therapist to thank for this observation too, though as she correctly identified, at some level I’m just as aware as she is of how I’m communicating, even if I will not consciously admit it. It’s the clothes that I wear – particularly the really inappropriate ones when I’m feeling flirtatious or when I suspect that our conversation will move onto the subject of sex. It’s the emails I bombard her with less than twenty four hours after session and with less than twenty four hours to go until the next; none of which really requires a reply, but I write to ask for one anyway.

My therapist talks about how sometimes I substitute action with thought – which is a nice way of saying ‘think before you act’. But it’s also a way of saying that although ‘actions may speak louder than words’, that tends to apply more to consciously chosen actions, where the action evidences the words, rather than avoiding them. Unconsciously chosen actions, not preceded by thought, are communication-avoidant, and what they are evidencing is much less clear.

My emails were communicating an urgent need to let her know I still needed her, still wanted her, still missed her, after I felt I’d ‘pushed her away’ the previous weekend and in the last session. The really short shorts and bare legs – well, I’m in the middle of talking about what they might have been communicating, so forgive me if I put that one on hold for now!

I tried to apologise to my therapist for the emails and for the inappropriate clothes – but she would have none of it. As she pointed out, it is all ‘grist for the mill’ and what’s important is that we talk about it. I know no one who always thinks before they act, and rather than berating myself for putting on a disguise, I should instead try and remember: “A mask is what we wear to hide from ourselves”**. If that’s the case, paying attention to how we’re ‘clothed’, can give us some insight into what we’re afraid of; what it is that we’re hiding from. As this wonderful quote says:  “In a corner of my soul there hides a tiny frightened child, who is frightened by a corner where there lingers something wild”***.  The difficult thing about therapy, is realising that the frightened child and the ‘something wild’ can both be parts of ourselves. When we start talking about them rather than acting them out – perhaps then we can start to integrate them into our view of ourselves, and to accept them.

And perhaps then there will be no need of a mask to hide behind; at least in therapy, and to ourselves.

16 thoughts on “Censored: wearing a mask in therapy”