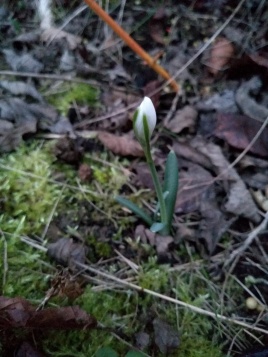 I made what looked like a very small decision last week, but it felt as though it carried particular significance.

A few years ago I was one of a number of runners up in a writing competition, and part of my prize was a book on particular hobby – for the sake of anonymising details of this story, let’s say it was baking! I’m not a baker, and it’s not something I can see myself developing an interest in, in the foreseeable future. However, I am aware that one of my therapist’s daughters is a keen baker, and I thought of her as soon as I saw the book.

Over the last few years I have wondered, on and off, about what to do with the book. I’ve tried to think of friends of mine who might appreciate it and only came up with one name. A number of times I was on the verge of mentioning it to that friend, but something always held me back.

Every time I saw it on my shelf I would think of my therapist’s daughter, and how much I thought she might like it. Perhaps I simply wanted to hold onto any reminder of my therapist, however oblique, and however uncomfortable (because after all, the book was also a reminder of the family of which I was not a part). Part of me wondered whether one day, in the far distant future, I might actually take up baking myself. I know that that part of myself was the one that wanted to please and thought that the way to do so was to conform to another’s way of being, or a way of being that was admired or approved of. My therapist is also a baker, and I imagined this was a precious link between her and her daughter, something that she would observe in her daughter, and feel moved, or proud. I have an enormous ache for her to feel proud of me, to feel moved by me.

On the other hand, the part of me that indulges fantasy still held onto the hope and the desire that I might actually be able to give the book to my therapist to give to her daughter. The logical part of my brain knows how unrealistic that is, and also how strange and uncomfortable that could be, from the point of view of my therapist’s daughter. But my mind was holding onto the idea of a tangible expression of my desire to belong to and be a part of my therapist’s family – a hope and desire that is a perfectly legitimate and interesting subject for discussion in therapy, but one that cannot get played out in reality, because it is at odds with reality. It doesn’t fit with the facts, or with what is possible.

Last week I decided to give the book to the daughter of a friend of mine, who though still at primary school, loves to bake and is already impressively proficient at it! Giving it to ‘a daughter’ (albeit not my therapist’s daughter) rather than to a friend, somehow felt like the right thing to do. It made me more conscious of the ‘divided role’ my therapist’s daughters play in my fantasies, as either sisters, or daughters. But more than that, I was aware that giving away the book felt like a significant parting – a parting with a way of thinking and being, as well as a parting with an object.  It signified acceptance of reality as it is, and the impossibility of the fantasy I had held on to. It is one thing to know reality, and another thing to attempt to come to terms with it. Giving away the book was a small victory,  but it wasn’t completely easy and straightforward, even after all this time and work – there was a tug, a wrench, in giving it away, even though I knew I needed to do it.

Giving the book away also signified acceptance of the fact that the reality of my relationship with my therapist does not in any way rest or depend on these oblique and tangible connections, which have little meaning in the context of the relationship, and neither do they add anything to it. The only things that carry weight and create a greater sense of internalisation of the relationship, are the things that transpire in the room or are closely connected with them. That might include tangible objects (for example, the stone my therapist gave me, or perhaps objects I have given to her), but on the whole they live in the interactions, moments, and memories shared, and the ways those become absorbed into oneself.

The decision I made last week therefore felt as though it flowed out of the work I was doing in therapy just before Christmas, both in relation to acceptance of the nature of the therapeutic relationship (including its time-limited aspect), and the decision to ask my therapist to destroy my ex-therapist’s notes of our sessions, without me reading them (a decision almost three years in the making, while my therapist acted as the ‘custodian’ of the notes for me). It felt like a small victory, and both a sign of and an outpouring from the larger internal victory that had come before. Though I was not consciously trying to do ‘therapeutic work’ over the Christmas therapy break – and in fact I was trying to take a break from it! – it’s good to know, through small victories such as this, that the work continues anyway, in the subconscious. Much as, I imagine, mysterious things were happening underground which led to my first snowdrop appearing in my garden, just a few days after the new year……….