[Preamble: A reader asked if I was claiming, in this post, to have Dissociative Identity Disorder (DID), and so I wanted to clarify what I am trying to describe, and make it clear that I am not here talking about DID. As I understand it, in DID the ‘parts’ switch in and out and aren’t aware of each other at the time, and to a large extent have their own memories as well. Whereas my ‘parts’ are simply the roles and different ways of relating that I tend to fall into – some are more childlike, and some more parental, for example. But I’m aware of them all and as far as I retain memories (which is an issue for me generally) they are all ‘my’ memories, covering all experience irrespective of what role I feel I’m in, and when I speak in this post about locking things away, I am talking about suppressing feelings rather than ‘switching’. I feel conscious when I am talking about ‘parts’ that I am to some extent trespassing on the language of DID – however, I think that it can be a helpful language and way of thinking about aspects of oneself in general, and I am hoping I won’t confuse or offend by using it!]

It has been useful for me recently, to be able to think of the different aspects of myself as semi-distinct ‘parts’, and I drew a picture of these in a recent post. Bearing them in mind has helped me to more easily identify when I am slipping into particular ‘roles’ or ways of being, and to try and stay on top of and in control of, the various thoughts and emotions that accompany them. It has also helped me to try and figure out ways of soothing or helping myself, depending on which ‘part’ is most at the fore.

However, I have started to wonder whether I am beginning to misuse the concept – as with most things, there can be less helpful applications in addition to the valuable ones. Last weekend I felt as though I was hovering above my feelings; for example, I was aware of at least three different emotions in response to my therapist’s offer of an additional session this week, but I wasn’t really feeling any of them. I felt like an observer of, rather than a participant in, my own reactions. And when my therapist asked me a few days ago how I had been feeling over the weekend, I found I couldn’t really answer the question.

That experience may have been a response to my intense sessions last week, when I was describing past distressing events in which I had dissociated and felt as though I was observing myself. Perhaps my sense over the weekend of being a ‘watcher’ of my feelings, was a mild re-creation of that experience. On the other hand, I have also noticed a tendency recently to use my ‘parts’ as a sort of ‘dumping ground’ for my feelings – somewhere to put them to ‘get rid of them’. Or, thinking of it another way, I have come to visualise my ‘parts’ as lockers – places where I can shut things away that I consider ‘bad’ and undesirable. This is particularly true of aspects associated with the part I call ‘the stroppy one’, and feelings and behaviours that remind me of the ‘teenage me’. These are the aspects described in recent posts such as ‘Addicted to feeling torn’ and ‘A tale of three houses: therapy, progress and internal conflict’ – self-destructive, relationship-destructive, looking for a fight. I am starting to get a handle on how to deal with the ‘inner child’ part of me, but I haven’t got a clue about how to reach the slightly older version of that child. And so it has felt much easier to simply pick up on her presence, think ‘oh, that’s not good’ and then mentally compartmentalise her experience and try and shut it away.

My therapist encouraged me to think of the parts as filing cabinet drawers rather than lockers – not somewhere to shut feelings away, but a way of identifying where they might belong, where they have come from and what they might be linked with. I think that is helpful, but I’m still struggling to find a middle ground between becoming immersed in all my emotions, whether positive or negative, and maintaining a healthy perspective without cutting myself off from them. I didn’t like that sense of ‘hovering over’ my feelings during the weekend – it felt far too remote.

As well as feeling ‘cut off’, another difficulty of trying to lock parts away, is of course the fact that it doesn’t really work. The parts are still persistently there, and it takes mental energy to actually keep the lockers locked. While that energy is slowly being drained, the parts themselves are growing in their clamour to be heard, and they become more easily triggered and harder to ignore. A couple of days ago I went into therapy feeling a little like the person on the left, and came out feeling a lot like the person on the right: 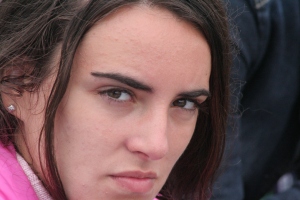 It wasn’t just my ability to keep ‘the stroppy one’ from taking over that seemed to have vanished, but my desire to do so as well. Although some part of me really didn’t want to feel that bad, other aspects were colluding to persuade me that it was pointless to resist the angry and self-destructive feelings, and that giving in to ‘her’ would be a welcome relief.

Perhaps if I had tried to consistently ‘file’ her rather than ‘dump’ her, I may have been more successful in terms of staying in control; though I suspect she is almost as resistant to categorisation as she is to segregation! But I have been trying to keep her away from my therapist, fearing the wrecking power that she has over the relationship, and perhaps that was a mistake. Things always have more power when not talked about, and therapy should be the place where anything can be brought out into the light.

I will continue to try and understand the various parts of me, and allow myself to experience them rather than trying to identify but then ignore them. In the meantime, if anyone has any suggestions on how to get through to a stroppy teenager and help her feel better, they would be very welcome!

[Warning – liberal use of the ‘f’ word, though purely for artistic purposes…..]

This is a landscape of parts – a landscape of me. We all have them – inner children, inner teenagers, inner parents – I’m just getting a little more acquainted with mine. Some of them are two sides of the same coin, like the terrible teenage twins; some tend to go hand in hand, like the ‘flat one’ who doesn’t feel much and ‘the scathing one’ who just invalidates those who do. I’m aiming to develop the ‘me’ in the middle – but I really don’t have a clear idea of who that is yet.

During and after my last therapy session I was way over on the left – and somehow this picture became my way of trying to process and understand that, while also attempting to keep the terrible teenage twins at bay.

If this all seems a little strange – well, it does to me too. Being part(y) to the conversations in my head is one thing – representing them by coloured blobs – “why are you drawing clouds?” my husband asked – is another. I hope someone finds it useful. Or at least mildly interesting. Perhaps someone will look at this and think, “phew, I am not alone”. In which case, no you’re not, in more than one way, it seems…..