World Suicide Prevention Day is observed on 10 September every year. It promotes awareness, commitment and action towards preventing suicide, with events and activities being held around the world. Suicide is still a taboo subject, though more people die through completing suicide than through murder or war – more than one million every year worldwide, with twenty times that number attempting suicide. Over the last few months I have written about the importance of talking more openly about suicide, and the factors that might prevent us from doing so.

But for this World Suicide Prevention Day I wanted to re-post I poem I wrote just as I started to come out of a three week period of feeling suicidal in August 2014. What prompted the poem, and the start of that emergence from suicidal feelings, was the incredibly supportive response to a post I wrote describing my depression and desire to escape from life. That support helped me to turn a corner; and as I drove past a beautifully lit medieval castle at night, which only days before had triggered mental images of falling from its crumbling walls into the shadows below – words of strength started to flow through my mind instead. I hope this poem can be an encouragement to anyone who is struggling with suicidal thoughts now, on 10 September itself, or in the days afterwards. An image of death and despair can become an image of strength and survival, and sometimes all it takes are a few words from some one or some others who can see that you have a place in the world – however impossible that might feel to believe right now.

The poem is called ‘If the shadow falls’. 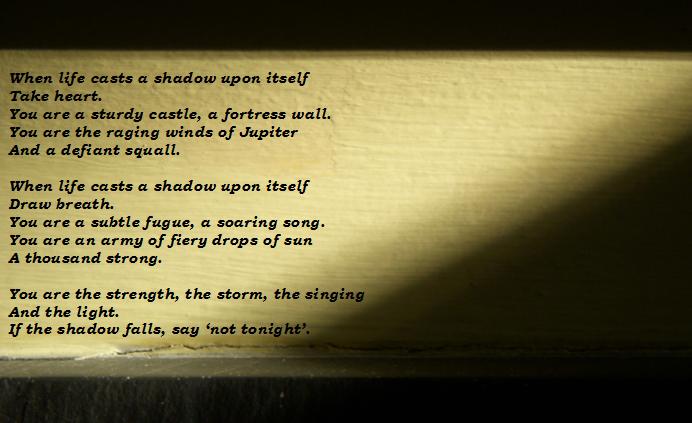